Al-Sadd climbed to the top of the QSL standings temporarily following a 4-2 in over Muaither in the Round 4 match played at the Jassim bin Hamad Stadium on Friday.

The win gave the Wolves a tally of 10 points from four games that comprised three wins and a draw. Mohammed Kasola gave Al-Sadd the lead in the 9th minute before Muaither’s Saeed Isa bundled the ball into his own net to make it 2-0 to the hosts just two minutes later. In the 43rd minute, Baghdad Bounedjah scored the third goal for Al-Sadd.

In the second half, Muaither clawed back into the game with two goals. First, Dioko scored in the 62nd minute and then Ayoob Oudrassi netted from a penalty in the 78th minute to make the score 3-2. Finally, substitute Abdelkarim Hassan came on to seal the game 4-2 in Al-Sadd’s favour with a goal in the 88th minute.

Saddawi pressure from the beginning

Al-Sadd started the game looking to make an immediate impact and went on the attack. In the 5th minute, Mohammed Kasola sent a powerful header at goal but it was kept out by Muaither keeper Basil Zaidan with difficulty. Two minutes later, Bounedjah tried a shot which was deflected out for a corner.

In the 9th minute, Al-Sadd took the lead in the match after Kasola met Xavi’s cross with a header to score past Zaidan. Just a couple of minutes after the first goal, Al-Sadd extended their lead. Muaither’s Saeed Isa failed to clear the ball after Jugurtha Hamroun’s header and ended up putting the ball into his own net.

The match continued with Al-Sadd dominating throughout by attacking through the wings and also from deep. The midfielders kept bringing the ball quickly back into the attack after clearing the danger from Muaither’s strikers. In the 37th minute, Ali Asad dribbled down the left and played in a cross to Bounedjah, who controlled the ball and took a shot but it went just over the crossbar.

In the 43rd minute, Bounedjah scored the third goal for Al-Sadd after acrobatically finishing a cross from Ali Asad on the left. With the score at 3-0 to Al-Sadd, the referee then went on to blow for halftime, following a two-minute period of added time. 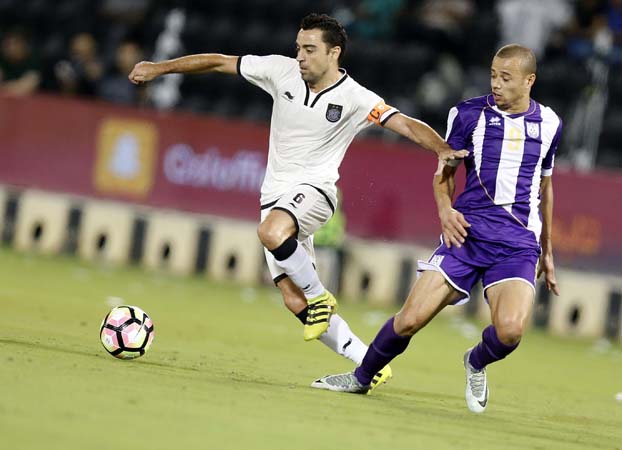 Calm start to the second half; Dioko scores

Al-Sadd went into the second half with the same team as in the first. There was a sense of calmness prevailing during the early minutes of the half. No real chance popped up until the 62nd minute when Muaither striker Dioko took advantage of positional mistakes from the Al-Sadd defence to score with a solo effort.

Al-Sadd made two changes after Muaither’s first goal, taking off Hossam Kamal and Ali Asad, who were replaced by Abdelkarim Hassan and Hamed Ismail. After the goal, Muaither kept up the pressure. On 78 minutes, Muaither added a second goal after Ayoob Oudrassi converted a penalty which was given when he was brought down in the box.

Salem adds to the midfield, Abdelkarim makes it 4-2

Jesualdo Ferreira then sent on Salem Al-Hajri to support the midfield as Muaither went on the offensive in search of the crcial equalizer. In the 86th minute, the two substitutes combined to score Al-Sadd’s fourth goal of the game. Hamed Ismail dribbled down the right and sent in a low cross which was finished with aplomb by Abdelkarim Hassan. The score was then 4-2 and that is how the game ended.