The Al-Sadd football first team continued with its daily routine training on Saturday, day 3 of the 2017-18 preseason camp which is currently being held in Bad Häring, Austria until the 5th of August.
The Wolves began Saturday’s morning session at 9:30 AM at the allocated pitch in Bad Häring, kickstarting with warmup exercises under the supervision of fitness coach Jose Pedro.

Later, the players moved on to tactical training during which the coaches divided them into two groups and implemented passing drills. 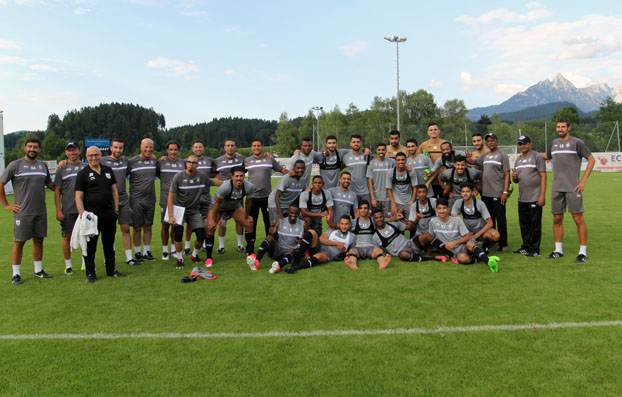 The evening session, which began at 5:30 PM, witnessed special training for the forwards and midfielders to work on their dribbling, shooting and dealing with crosses in front of the goal. The defenders worked on crosses, clearing the danger and marking the opponent.

Algerian striker Baghdad Bounedjah made his first appearance in training after joining the preseason camp. He underwent physical training during the morning session before joining his team mates for team training in the evening.